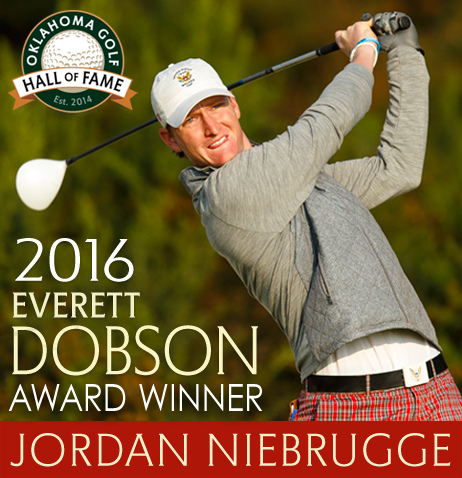 The Oklahoma Golf Hall of Fame has named Jordan Niebrugge of Oklahoma State as the recipient of the first Everett Dobson Award, honoring a senior graduating from a four-year Oklahoma university who has demonstrated outstanding sportsmanship, leadership, citizenship and playing ability.

Award winners receive a plaque and a $5,000 contribution to help with their professional careers, whether it be in golf or another venture. Niebrugge has already turned professional since graduating from Oklahoma State, playing in six professional events this summer, and intends to go to PGA Tour Qualifying School this fall.

Niebrugge will be honored at the 2016 Oklahoma Golf Hall of Fame Induction Banquet Sept. 18 at Southern Hills Country Club. Hall of Fame inductees that evening will be Nancy Lopez, Tommy Bolt, Jerry Cozby, Labron Harris Sr. and W.K. Warren Sr. and W.K. Warren Jr. Also honored will be scholarship recipients Hadley Walters and David Trimble. The dinner is essentially sold out but those wanting to attend can be put on a waiting list by going to www.oklahomagolfhof.org or by calling 918-280-0787.

The award is named for Everett Dobson, Oklahoma City businessman, avid golfer and philanthropist who provided the seed money to launch the Oklahoma Golf Hall of Fame in 2014 and served as the first chairman of the executive board.

“The Scholarship Committee and the board as a whole had some brilliant nominations from throughout the state to consider,” said Nick Sidorakis, board chairman and general manager of Southern Hills Country Club. “Jordan has done a magnificent job representing himself, his teammates and his country with dignity and class.”

“It’s an honor to win this award and be recognized by the board,” Niebrugge said.

Niebrugge, who was recruited to OSU by current coach Alan Bratton and former coach Mike McGraw, was a key performer as a freshman, then gained national acclaim in the summer before his sophomore year by winning the Western Amateur and the U.S. Public Links Championship, not to mention the Wisconsin State Amateur. He followed that up by helping lead OSU to second place in the national championship at Prairie Dunes Country Club in Hutchinson, Kan.

His leadership role expanded in his junior and senior seasons. Not only on the course, but in the classroom, where he maintained a 3.639 grade point average in Entrepreneurship and won numerous academic awards.

“Jordan came in and was a leader and our best player almost right from the start,” said OSU coach Alan Bratton, who helped recruit Niebrugge as McGraw’s assistant. “What a tremendous example he’s been of a student athlete. To do what he did in the classroom and play at the level he did for four years, what a great example to leave for others.”

As a player, Niebrugge excelled not only playing for OSU, but helped lead the U.S. to victory in the 2015 Walker Cup. His most impressive accomplishment, however, was finishing sixth as an amateur in the 2015 Open Championship at St. Andrews, the best finish by an amateur in any major since Chris Wood tied for fifth at Royal Birkdale in 2008.

In addition to his work on the course and in the classroom, Niebrugge participated in various charitable ventures, from Kids Helping Kids clinics to Putts for Pets and Coaches vs. Cancer events.