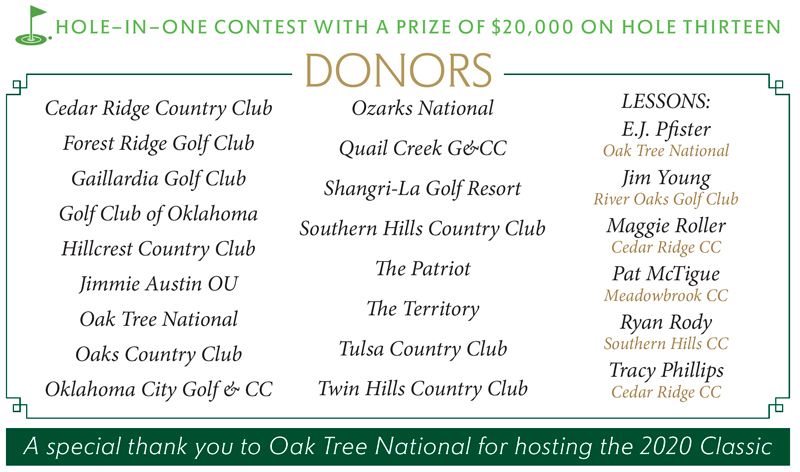 The Oklahoma Golf Hall of Fame Classic, a fundraiser to support the 501 C3 organization’s scholarship and Everett Dobson Award programs, will be held October 20 at world renowned Oak Tree National in Edmond.

Sign up now for this fun and entertaining event which will include great tee gifts, prizes, breakfast and lunch and many special guests, including members of the Oklahoma Golf Hall of Fame.

A foursome is just $1,500 and other levels of sponsorship are available as follows:

Presenting sponsors will have two teams of four, plus name used in all tournament pre and post publicity. It will also include a table for eight at the 2021 Oklahoma Golf Hall of Fame induction dinner.

Help support the Oklahoma Golf Hall of Fame in its mission to award two $5,000 scholarships to deserving Oklahoma high school seniors and the $5,000 Everett Dobson Award to a deserving Oklahoma collegiate senior. All three awards made on an annual basis.

Hole Sponsor – $500. Includes signage for your company on a particular hole and in the pre-tournament media.