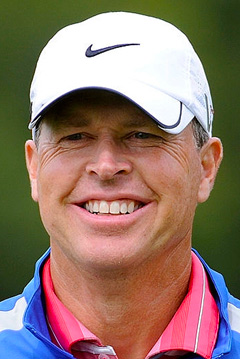 Bob Tway’s greenside bunker shot on the 72nd hole at the Inverness Club to clinch the 1986 PGA Championship and beat Greg Norman (the world’s No. 1-ranked player at the time) will forever remain one of golf’s most memorable moments.

Incredibly, 11 years earlier at the age of 16, Tway was playing a different sport on grass. He was a 5-foot-6, 135-pound option quarterback in Georgia. A broken arm his sophomore year in high school led to Tway’s early retirement from the sport and golf became his primary focus.

By the time he arrived at Oklahoma State in 1978, Tway was a 6-foot freshman. Four years later as a senior, Tway stood 6-foot-4 and towered over the competition as the 1981 Fred Haskins Award winner for collegiate player of the year. He also was a three-time, first-team All-American, the 1979 Big Eight medalist and helped lead the Cowboys to national championships in 1978 and 1980 with a runner-up finish in 1979.

Though it took four years for Tway to earn playing privileges on the PGA Tour in 1985, he had an immediate impact upon arrival. His second season resulted in four victories, including the aforementioned PGA Championship, 13 Top-10 finishes, placing No. 2 finish on that year’s official money list (just $516 behind season leader Greg Norman) and concluded by being selected as the PGA of the America’s Player of the Year.

Alas, it would take the ever-tinkering Tway another 17 seasons to win four more times.

Referring to his pro career as “a roller-coaster ride,” Tway is admired for his perseverance that has resulted in eight PGA Tour career victories, 11 runner-up finishes, 10 third-place finishes, 103 Top-10s, 221 Top-25s and nearly $15.8 million in official earnings. Added to the mix is more than $2.4 million pocketed so far on the Champions Tour, plus five other professional wins, among them being the 1985 and 1987 Oklahoma Opens.

A 2009 inductee into the Oklahoma Sports Hall of Fame, perhaps Tway’s biggest sin was seeking the perfect swing, something nearly every pro golfer does even when they’re successful. “Probably some of it is my fault for tinkering with my golf swing,” Tway has said, “but if you’re not trying to get better, then what are you trying to do? If I had a crystal ball, maybe I wouldn’t have done that stuff, but I was always trying to get better. What can I say?”

Tway’s life has gone full-circle. He was born in Oklahoma City, but the Tway family journey began when he was 9, relocating to St. Louis, then Connecticut, then White Plains, N.Y., and eventually landed in Marietta, Ga.

When Stillwater harkened, Tway made the move back to Oklahoma and has resided in the state ever since. He met his future wife, Tammie, during his junior year and they got married after Tway’s senior year in 1981. The rest is golf history and what a superb history it has been.

Thirty-one years after stepping out of that bunker victorious at Inverness, Tway now steps into the Oklahoma Golf Hall of Fame.