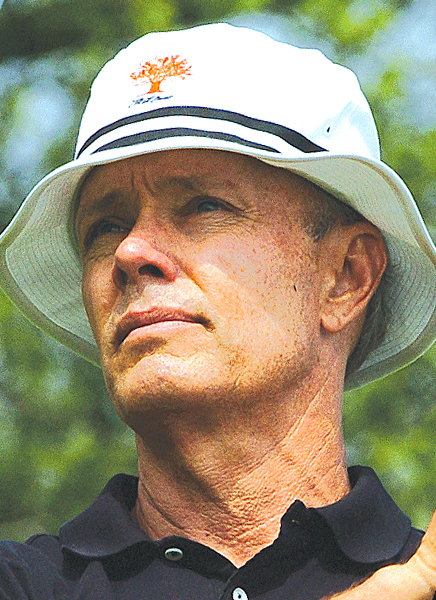 Mark Hayes has been a prominent golf fixture in Oklahoma for six decades. He excelled at an early age and just kept getting better and better.

A native of Stillwater, Hayes won multiple in-state tournament tournaments while growing up and is considered to be one of the finest junior players Oklahoma has ever produced.

Hayes took up the game at age 6 in College Station, Texas, where his father was the freshman basketball coach at Texas A&M. He idolized Ben Hogan, Arnold Palmer and Gene Littler as a boy and was for fortunate to caddie for Littler in a professional event at Quail Creek Golf & Country Club.

By 1965, Hayes was the Class A state medalist playing at Northeast High School and later teamed with Tewell to win state titles at Stillwater (Donart) High School.

Hayes was Oklahoma’s 1967 and 1971 State Amateur champion and in 1972 won both the prestigious Sunnehanna Amateur and the World Cup Amateur, helping the United States capture the Eisenhower Trophy.

Hayes played collegiately at Oklahoma State (1968-71), where he was a two-time, first-team All-American his junior and senior seasons playing for Labron Harris Sr., who was among the 2016 inductees into the Oklahoma Golf Hall of Fame. After college, he served two years in the U.S. Army, working on a military course at Fort Jackson, South Carollina along with future PGA Tour competitor and friend Joe Inman. He competed for the army, winning the U.S. Military Inter-Service Golf Championship, and saved his off days for competing in amateur events, winning the Sunnehanna Amateur, finishing second in the U.S. Amateur and playing for the victorious U.S. side in the World Cup.

Known for wearing his signature bucket cap, Hayes turned professional in 1973, won three times on PGA Tour in the 1970s and also finished runner-up six times. He placed no worse than 68th on the money list for eight straight seasons (1974-81).

Hayes’ premier tour victory came at the 1977 Tournament Players Championship. He picked up his fourth and final PGA Tour victory at the 1986 Tallahassee Open.

Hayes played on the victorious Ryder Cup team in 1979 and was teammates with Oak Tree neighbor Gil Morgan. Hayes, who won his Sunday singles match against Antonio Garrido, actually was first alternate for the team and ended up replacing leading money winner Tom Watson, who withdrew to be with his wife, Linda, for the birth of their first child.

From 1976-82, Hayes had Top-15 finishes in all four majors. His best finish was a tie for sixth at the 1980 U.S. Open at Baltusrol, where he began the final round just two strokes behind eventual winner Jack Nicklaus. Hayes shot a 63 in the second round of the Open Championship at Turnberry in 1977, tying the record for lowest round in any major championship.

A long-time resident at Oak Tree, Hayes was a three-time Oklahoma Open champion (1976, 1988, 1993) in the days when the field was its most competitive and culminated with a victory at age 44 across the street at Oak Tree Country Club.

In the late 1980s, Hayes began his own golf course design company and completed multiple projects throughout Oklahoma and neighboring states.

Some of his work included a renovation of the East Course at Oak Tree Country Club, new design of Eagle Crest Golf Course in Alma, Ark. and renovations of The Cascades in Tyler, Texas, Stillwater Country Club, Oak Tree National and many more.