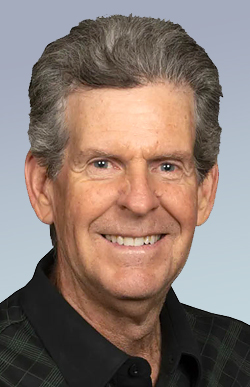 When the Edwards family first moved from Wichita Falls to Edmond, Kickingbird had yet to open. Danny hit balls in a field, and often secretively, on the still growing-in course while no one was watching. Somehow he became proficient enough to win the state championship for Edmond and earn a scholarship to Oklahoma State.

In addition to the victories at OSU, Danny’s amateur career included a stint on the 1973 Walker Cup Team. He was low amateur the same summer at The Open Championship. He won the 1972 North and South Amateur and the 1972 Southeastern Amateur.

Although he played briefly on the Champions Tour, Danny was consumed with other opportunities. He was an original founder of Royal Grip, later successfully sold to investors. He became a highly proficient professional auto racer and was heavily involved with divot repair company (Green Fix Golf). He has recorded a series of videos teaching proper chipping methods.