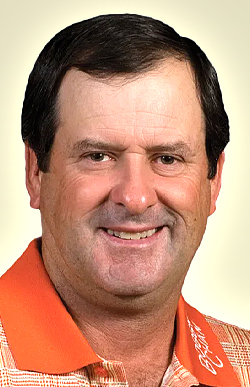 Although some mistake his laid-back personality for a lack of the same drive that fueled older brother Danny, that would be a mistake.

“David was one of the most driven players we’ve ever had at Oklahoma State,” said former teammate Jones. “He wasn’t the best player when he got here but he was when he left.”

David, who did get to practice and play at the now-opened Kickingbird, went to OSU in 1974, where he aver- aged 77.6 shots per round as a freshman, lowering that to 71.8 as a senior when he won two events, finished second or third in five others and capped off his dominating year by winning the 1978 NCAA Individual Championship and leading the Cowboys to the team championship.

He didn’t take long as a professional to break into the win column, claiming the 1980 Walt Disney World National Team Championship with brother Danny, then winning the 1984 Los Angeles Open, the 1992 Memorial Tournament and the 1993 MCI Heritage Golf Classic. He also won the 2006 3M Championship on the Cham- pions Tour and was a two-time winner of the Oklahoma Open (1994 and 1996).

Never a long hitter, David was highly accurate and a great putter. He led the Champions Tour in Driving Accuracy (80 percent) in 2008 for the third consecutive year. In 2007, he had the longest streak of consecutive holes without a three-putt for the season (263 in a row).

Whether making an appearance at a youth tournament, a golf expo or a charity function, David has always been generous with his time to give back to the game in Oklahoma.