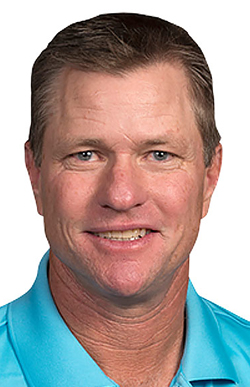 One of the few golfers to win a PGA Tour event (the 1985 Western Open) before winning the NCAA Championship, which he did for Oklahoma State in 1986, Verplank has walked the summit of the golf world but also had to fight his way out of some deep valleys.

A Type 1 diabetic, Verplank long played with a pump to control his blood sugar level. He has battled numerous other wrist, elbow and shoulder injuries and lost the entire 1997 season after elbow surgery in 1996.

Verplank was a mainstay of the “Oak Tree Gang” playing out of Oak Tree National in Edmond. He still plays on the Champions Tour but is also getting into broadcasting and has a contract with CBS.

The Dallas native had a sensational amateur career. In addition to the NCAA and Western Open championships, he won the 1984 U.S. Amateur Championship at Oak Tree National. He won the Porter Cup twice, sweeping the Western Amateur, Porter Cup and Sunnehanna Amateur in 1985. The 1982 AJGA Player of the Year, he won the Texas State Amateur three times (1982, 84, and 85).

Verplank won nine times at OSU, capped by his final event, the 1986 NCAA Championship. He was a three-time first-team All American. Upon induction into the Oklahoma Sports Hall of Fame in 2016, his former coach Mike Holder said he regarded Verplank as the best collegiate player ever with the possible exception of Phil Mickelson.